MSExchangeIS Automatic Start When Migrating from SBS2003 to SBS2008

When migrating from Windows Small Business Server 2003 to Windows Small Business Server 2008 you may find that the Exchange Information Store Service does not start automatically on the destination server after installing Windows SBS 2008. Because SBS 2008 is a global catalog server, when Exchange 2007 installed on a GC, some services like: Microsoft Exchange System Attendant, Microsoft Exchange Information Store may not start automatically, which is normal.

The cause of the issue is that Exchange services depend on following Windows Services:

When any of these service do not start before Exchange tries to start Exchange services, the Exchange Information Store service cannot be started. You can either change the service dependencies, or you can add BootPause registry key to delay the startup of Exchange Server. Microsoft provides instructions to perform these steps in the following knowledge base article: http://support.microsoft.com/kb/940845/en-us.
Posted by Eric James at 9:41 AM 1 comment:

Virtualization is unquestionably one of the hottest trends in information technology today. This is no accident. While a variety of technologies fall under the virtualization umbrella, all of them are changing the IT world in significant ways.

Free Windows 7 shirt for all who register.

On day where I’m still recovering from a long day, long night, and an early morning support call with Microsoft – I needed a fun reminder as to how neat this technology can be.

Working with a client this morning, we wanted to test our System Center Virtual Machine Manager installation.

On the technical side of the equation, this environment is a three node Windows 2008 R2 Hyper V failover cluster connected to a backend SAN.  A separate Windows 2008 R2 server is acting as the virtual machine management console.

We took turns, one by one, putting the virtual host machines into Maintenance Mode.  This automatically moves any virtual machines on that particular host another host in the cluster.  This move is “live”, so end users don’t know anything is happening while the move takes place or that the server their using is now running from a different virtual host machine.

Thu, January 21, 2010 — Computerworld — Microsoft will release its emergency patch for Internet Explorer (IE) on Thursday, the company said today as it also admitted that attacks can be hidden inside rigged Office documents.

"We are planning to release the update as close to 10:00 a.m. PST as possible," Jerry Bryant, a program manager with the IE group, said in an entry on the Microsoft Security Response Center (MSRC) blog.

Yesterday, Microsoft confirmed speculation that it would issue an "out-of-band" update for the IE vulnerability, but postponed specifying a ship date until today.

Microsoft also updated the security advisory it originally published last week when it acknowledged a zero-day IE vulnerability had been used by hackers to break into the corporate networks of Google and other major Western companies. Google has alleged that the attacks were launched by Chinese attackers. Subsequently, security experts have offered evidence that links the attacks to China .

The revised advisory also addressed claims made by researchers that it's possible to exploit the newer IE7 and IE8 browsers, and even circumvent Microsoft's recommended defensive measure, DEP (data execution prevention). However, the advisory waffled on whether DEP bypass was effective, neither confirming or denying the researchers' allegations.

"There is a report of a new Data Execution Prevention (DEP) exploit," Microsoft said in the advisory. "We have analyzed the proof-of-concept exploit code and have found that Windows Vista and later versions of Windows offer more effective protections in blocking the exploit due to Address Space Layout Randomization (ASLR)."

Even a follow-up post by Jonathan Ness, an MSRC engineer, on the company's Security Research & Defense blog declined to spell out whether the DEP bypass attacks were effective. Ness, however, did reiterate Microsoft's point that the only in-the-wild attacks seen thus far have been aimed at IE6.

He also touted the additional security that ASLR and IE's Protected Mode provide, and published a table that spelled out the current attack and threat situation for IE and Windows users.

Microsoft also admitted that the vulnerability could be exploited through malicious Office documents, a vector that had not been disclosed previously. "We are also aware that the vulnerability can be exploited by including an ActiveX control in a Microsoft Access, Word, Excel, or PowerPoint file," said Bryant. "To prevent exploitation, we recommend that customers disable ActiveX Controls in Microsoft Office."

Tomorrow's update for IE will patch all attack avenues, Bryant added, including the Office document vector.

To read the complete article:

Posted by Unknown at 1:47 PM No comments:

This is a terrific little gem for remote administration of a server.  The iDRAC, integrated Dell Remote Access Controller, allows you to view the remote server during a full reboot, in addition to remote console view, like an RDP session. 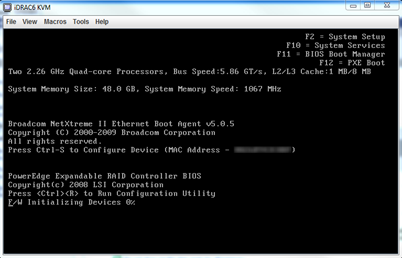 The image above is a snapshot of my server booting up.

The card is self-contained so even if the server blue screens, you can still view the machine.

I don’t know if I’d configure this through a publically accessible connection, but I’m certain to configure for the LAN where I could VPN to the network and then launch the browser based iDRAC utility.

As we enter 2010, this card is a must for all server quotes and installations.

Our mission at RoseBud Technologies is to help our clients make better use of their technology. We bring our expertise to bear on the all too common problem of "it just doesn't feel right. It doesn't seem like I'm getting what I thought I was going to get from my technology investment."

Now, you can follow our blog to keep up with thoughts on new technologies and developments, important announcements, RBT news and upcoming events.